I am a geek, through and through.  So much so, that when I heard that most of the crew of Serenity (Firefly) were going to be at the Dallas Comic Con, I immediately bought tickets, booked a flight and found a hotel.  Not only did I buy tickets, but I spent a small fortune getting the coveted VIP tickets that would ensure that when I arrived, I would get the best chance of seeing the panels that my beloved celebrities would be hosting.  This was not my first con, but it was the first time that I even entertained the idea of paying for photos or signatures.  Ok, so I more than “entertained” the idea, I did it.  Go big or go home.  I bought 2 photos with Nathan Fillion, 1 photo with Jewel Staite (for my husband) and 1 photo with the nearly complete cast of Firefly (Morena Baccarin and Alan Tudyk backed out last minute).  All in all, those photos cost us nearly $600 (ouch, that’s the first time I’ve actually added that up!).  I rationalized this splurge by telling myself this was a ‘once in a lifetime’ opportunity (seven of the 9 together is almost unheard of) and that it would be an opportunity to meet them.  Boy was I wrong (or I have a funny definition of “meet”).  I don’t mean to be a Debbie Downer.  I really am a very positive person and I look for the silver linings.  My own misguided expectations are to blame here.  Let me share my story:

Our first photo was with Nathan Fillion.  I did get lucky on my photos with Nathan.  After the first photo was taken (of just him and I), they tried to shoo me out.  I expressed that we had purchased two photos (one with me, and one with me and my husband).  As I was moving to Nathan’s other side, I said “We have two photos.  Photos with Fillion are like shoes, you can’t have too many”.  I actually made the man laugh and he responded with “I like that!”  In the second photo with my husband, you can see a slightly more genuine smile on his face as he’s still laughing about what I’d said (the camera snapped just as he finished his last word).

Following the photo, I changed my profile picture on facebook to the photo I’d taken with Nathan Fillion.  It was a little funny because the photo I replaced looked VERY much like this new photo, except it was my husband and I, so it sort of appeared like I’d literally replaced him.  My husband saw the replacement and vowed revenge.  This was all fun and games, of course.  My husband went to get his photo with Jewel and also had fairly good luck.  He thought up a condensed sentence that he could spew out in the very few second they give you as you walk in, and told her what I’d done and asked if he could get a photo looking like he’s proposing to her.  She said “Sure!” and was very accommodating.  Immediately after the photo, my husband was shoo’d out and told to pick up his photo.

Showing it to me, he was in big trouble, because he did NOT get down on one knee when he proposed to me! (Again, I wasn’t really upset, this was really about a “one up” game).  I decided that I needed to get in front of Nathan again and see if he could help me get my husband back.  I also devised a quick way to tell my story, and decided to buy an autograph from him to see if he might write something on my photo to help me get my husband back.  I was also completely prepared for him to tell me that he just didn’t have time, which was completely ok and understandable.  In fact, I planned to finish my story saying that I understood if he couldn’t do it.  We were told only one quick story could be told.  I had mine down to just a few seconds.  I was the first in line for his signature that morning.  As he signed, he just “mmm hmm’d” at me and then said “Thank you” without even acknowledging what I’d told him, actually cutting me off after seeing the photo of Jewel.  I had shown him the photo of my husband and Jewel and pointed out that my husband had not gotten one one knee for me.  I honestly don’t think he was listening.  There was no acknowledgement whatsoever and it was very disappointing.  “Mmmhmm, mmhmm, here’s your $80 signature, now go away”.  It made it very awkward. 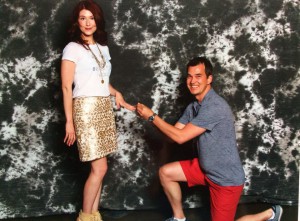 I really love Nathan Fillion and how he portrays himself, but I felt disillusioned.  Like the things he says in his interview are just talk.  I didn’t feel like he appreciated me as a fan.  I know that would be hard to convey in a few second time, but you can usually tell when someone is being genuine or when they are just shining you on.  I know they get creepy people who are inappropriate, but that wasn’t me.  I was being as respectful as possible.

So perhaps I should have asked around before I made the assumption I’d get to “meet” these celebrities.  Or maybe I should have thought through the idea a little better.  I had no idea that a photo with the celeb of choice would take exactly 7 seconds (15 for the photo with all 7 of them).  Fans were ushered in with a lot of urgency and “hurry! hurry!”.  You barely had time to strike a pose and smile before the camera snapped and you were being rushed out (even turning your head for a second look would get the volunteers all worked up telling you to “Go! Go!”.   Signatures were no better.  It was so disheartening and disappointing.  What I would have given for just enough time to shake hands with each one and say hello and nice to meet you.

Please don’t miss the point that I understand why they make the experience (can you call it that?) so quick.  Literally thousands of fans want to get that same photo/signture you just got.  I get it, but I don’t agree with it.  For the amount of money those photos cost, it seems to me that you shouldn’t get home and feel empty.  I can barely even recall the experience because it was so quick!  Nathan Fillion was friendly and did say hello as you walked in.  You barely had time to reply.  There was no connection whatsoever that you could walk away with, so that when you look at the photo, you remember your quick chat with the celebrity.  My photos feel empty.  It may as well have been a cardboard cut out.  The photo with the Firefly cast was even worse.  I couldn’t tell you, walking away from the photo, who was even in it or where they were standing.  Nathan said hello…no one else did.  Literally, there wasn’t even time to turn around and look at them before the photo.  I think the camera snapped the nano-second my ass hit the chair!  I tried to look back as I was walking out, but the volunteer was right there to move me along quicker. 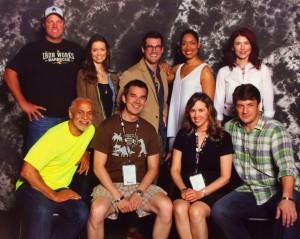 Honestly, I’d pay even more for my photo, if I could get 1 minute to connect with the celebrity in some small way.  To actually meet them.  I don’t expect them to remember me, but I’d like to be able to remember them, to tell my friends about this great experience of chatting with my favorite celeb for a minute prior to a photo.

Again, I get it…they are dealing with thousands of people a day, but these are their fans.  They’ve forked out large sums of money for a few seconds of his time.  A lot of the fans are very young, making the money they are spending even more precious.  I felt that Nathan Fillion should have put more effort forward.  The celebs are, after all, walking away with all of the proceeds from the photos and signings (which we roughly calculated for Nathan Fillion at about $250,000 for the two days he was there).  He deserves to get paid for his time, but his fans also deserve a little more authenticity.  At the very least, he should seem present in the moment.

Someone at the con was telling me about another con where you pay even more money for your VIP pass but they only offer 20 (instead of 200) and it allows the group of 20 VIP’s to hang out back stage with the celebs before the panels.  Sign me up for that one!

All that said, I’m glad to have my photos and I did enjoy the con immensely.  We had incredible seats for the panels we were interested in (within the first 3 rows).  We got to sing “The Hero of Canton” with Adam Baldwin.  Nathan Fillion put his arm around me 3 times and laughed at my joke.  I’ll hold on to those memories.